Recently, after the case of GameStop and Reddit, we have seen how a great controversy has arisen (which already existed, but has been debated again) regarding the use of social networks and forums to carry out mass actions and achieve concrete planned objectives.

To get into the subject, the first thing we are going to do is briefly explain what GameStop is, what it does, and what its situation is.

Later, we will explain how this whole event happened on Wall Street. What happened to GameStop? What are short positions and what have they led to? How did the share price rise? How has the Wall Street Bets community managed to put such great pressure on the demand for GameStop shares? Who are the “winners” and “losers”?

And finally, we will talk about the role of social networks in this type of event and what are the main points of view regarding this issue.

What is GameStop, What does it do, and What is its situation?

If we had to summarize in one sentence what GameStop is, we would say the following: it is a network of stores that sell video games and consumer electronics in person.

GameStop was (and still is) a company with great financial difficulties. It had its successful years from 2004 to approximately 2016, the year in which the company’s results began to decline steadily.

The great change that the video games industry and online sales have had in this type of business through digital platforms, has made companies like GameStop, with a business model based on physical sales and on-site presence, have very large losses. In the case of GameStop, in 2018 there were losses worth more than 600 million. 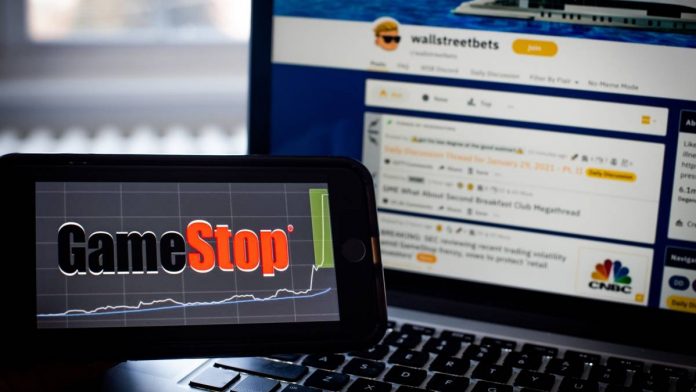 What has happened to GameStop and what has been the impact on Wall Street?

In the first place, it must be said that the company had poor financial results. Therefore, it was possible to bet that in the future those results would be worse and worse. If this were the case (and it was being this way) the shares would each time fall and lose value.

Several hedge funds (funds that use not only stocks, bonds, and Exchange-traded funds, but also use financial derivatives to try to make money in any market situation) had taken a short position on GameStop. This caused that at the moment in which unexpectedly (for the funds), many people demanded GameStop shares, there was a very large excess demand, which put pressure on the price to grow rapidly. This generated millionaire losses to the funds that had been positioned in short.

Short operations consist of the following: If a company has shared with a valuation (eg € 10 / share) and assumes that they will go down (eg € 5 / share) what you can do is look for people who have those shares, consider that the price is not going to go down and ask them to lend them.

If they lend them, they must be repaid within a specified period and pay a percentage of interest. But, once they lend them, they can be sold at € 10 (current price), and in this way, the user is left with the liquidity while waiting for the price to fall. If the price drops (which at the same time we collaborate to make it happen since when we sell the shares we increase the offer and lower the market price), we can buy back the shares, return them to their owner, pay the interest rate and keep the difference in the price of the drop (in this case the difference between the € 5 that it cost us to buy them and the € 10 that we obtained by selling them when we borrowed them).

The first circumstance that has occurred with GameStop is that many hedge funds had positioned themselves short and, therefore, had placed buy orders to protect themselves from possible rises (which would harm them). This means that if people were able to make prices go up, these funds were going to see how their purchase orders were going to be carried out automatically. This has made them collaborate with the rise in the price of the shares (hurting themselves), since the price rose, they bought and thus further increase the rise “short squeeze”.

This is where Reddit and the Wall Street Bets forum come in, with mass strategy and planning to drive the stock price up.

Members of the Reddit forum bought GameStop shares in droves and the more they bought, the more their price increased (and the more money they lost from funds that had been shorted).

The forum, with more than two million users, was able to take advantage of the strength of many small investors by contributing a reduced capital so that together they could raise the price of the shares in a “coordinated” way and generate million-dollar losses to the hedge funds.

Who are the “winners” and “losers”?

The main winners are all users who have benefited from the rise in share purchases, buying at a low price and subsequently selling at a high price.

On the other hand, the company itself has benefited from this whole situation by seeing how the share price has risen surprisingly and the focus and attention have been placed on it.

We can say that the main losers of this whole event are the hedge funds that had taken a short position concerning GameStop. Also, to a lesser extent, all users who entered late in the acquisition of shares and the price fell from the moment they bought and have had to assume losses.

It is also worth mentioning that there have been several “supporting actors” throughout the process that have ended up appearing on all the covers during the week of chaos in the purchase of shares of GameStop.

Stock purchase applications such as RobinHood or Webull, which did not allow users to purchase GameStop shares at certain times and made it difficult for a greater volume of users to acquire shares.

Here another controversy was opened with these applications about whether what they were doing was legitimate, or on the contrary, it was an illegal action against the private investors of these platforms.

Social Networks and the main points of view that are being debated.

Like so many other memes that go viral on social networks, the purchase of GameStop shares quickly spread among the investment and gamers communities and later spread throughout all social networks giving visibility to the whole world of what was happening.

Many fund managers or Wall Street investors (including many experts) classify these events as “meme stocks. ” It is called “meme stock” when there are movements in the prices of the shares that have little to do with the finances of the company or with news about it.

When the shares of a certain company experience large rises or fall after some recognized figure makes investment advice or mentions the price for whatever reason, it is said that the evolution and response in prices have nothing related to “coherent information “Or” valuable information “that has to do with the company.

The first point of view defended by the members of the Reddit forum “Wall Street Bets” and many users who have followed all the facts is the following:

The market has to function freely, offering the possibility that anyone can buy shares and sell them without any impediment (blocking of buying applications such as RobinHood).

Should we go after thousands of people who have coordinated freely and anonymously in a forum to invest in the stock market with tools that are public and accessible to all? “We are competing against Wall Street with its own game” has been the justification given by many of the users who have participated in the event.

On the other hand, the alternative point of view adopted by many of the fund managers or Wall Street experts who defend the SEC (Securities and Exchange Commission) guaranteeing that these types of practices are not carried out, either by acting through regulations in the market or strictly following activities on social networks.

In addition, they argue that these types of planning, to carry out mass actions with specific objectives through forums, are not “investment advice” or “stock market opinions” but rather, messages of “hate” or ” call to action ”against certain funds or to carry out illegitimate approaches in the stock market.

Should forum or social media users be able to freely buy shares or other investment vehicles in a coordinated manner?

Are they taking illegitimate actions against these funds?

Is it the responsibility of social networks to allow this type of behavior?

Should the SEC be held accountable for tighter monitoring of these types of events?

Are we going to see many more cases like the one with GameStop in the future?

What solutions can be proposed?

We, therefore, remain pending the answer to all these questions that are presented to us in the future and the new direction of social networks and forums in activities that go beyond the purely social. The debate is served.