The theory of Charles Darwin that says Only the fittest survive’ holds true in almost every aspect of life, and even in business. For companies driven by technology, being the “fittest“ would mean that the company will have to evolve in line with the latest in the space and at least in line with the expectations of the users, if not ahead. We have seen a lot of companies like Nokia that have been market leaders once disappear into oblivion because they failed to adapt. On the favorable flip side, some companies, although they might have been found it with a different business idea, have constantly and consistently evolved to match up with and surpass customer expectations that they have established supremacy beyond question. One such company that would have probably come to your mind when we were discussing the above is Netflix.

Netflix was founded in 1998, which is almost about the same time as Google. It started out as a company that rents out DVDs by mail. With the growth of YouTube, Netflix was quick to understand that the future belongs to streaming, and in 2007, they launched their online video streaming.

Slowly Netflix started to gain prominence, not just in the United States but all across the world, when it opened to a worldwide audience in 2016. The first Oscar in 2017 and the first Emmy award in 2018 cemented the place of Netflix not just as a company or a business but as a cultural icon. It has even gone on to release its own online store where people can buy merchandise inspired by the shows that they stream.

The COVID-19 pandemic and the lockdown imposed in various places contributed to the growth of Netflix. In the second quarter of the previous year, Netflix had total revenue of about $6.14 billion which was a massive 13% increase from the corresponding quarter in the year 2019.

What can you learn from Netflix?

Netflix has been the Point of reference for any streaming service today. It is natural that any entrepreneur who wants to build a service/business out of video on demand will want to follow the Netflix model. The Netflix model, however, is not confined to the business model alone but it also forays into various strategic partnerships that the company chose at the right time.

The first and foremost lesson that you can learn from Netflix is its nature to embrace change. Unlike its biggest competitor Blockbuster, Netflix was early to step into the territory of streaming. The five years between 2007 and 2012 spelled the difference between success and disaster for the biggest competitors of Netflix.

When we were still opening Internet Explorer or Mozilla Firefox on our desktop computers and getting into YouTube, Netflix was already thinking about smart televisions and other streaming devices. They built alliances with companies like LG, Sony, and Samsung to ensure that they made a prominent presence in smart television. It went a step further with Samsung and made exclusive content available for the galaxy series of users.

Netflix did not confine itself to the technical aspects but stepped into the cultural arena. It partnered with content creators and filmmakers in culturally diverse regions like South Africa, Japan, and India to create fresh and original content, making it not only a streaming platform but a leader in constant production as well.

Netflix partnered with big names in the technology space like Apple, Microsoft, Google, and Amazon, especially when it came to their smart devices and assistant. Even if Amazon has its own streaming service, you can still ask Amazon Alexa to play a movie on Netflix, making the relationship extremely symbiotic and democratic.

The business model and the revenue of Netflix

The biggest revenue of Netflix, without question, lies in the subscription fees that users pay. The Netflix model was that it would make unlimited content available for a specific cost. This would mean that a user can watch a classic for the same cost as a new movie that was released a few weeks ago. This presented an interesting proposition for all segments of the audience, and it was one of the factors that made Netflix an instant hit. The company is valued at about $216 billion and has found a parallel mention in the stock market along with Giants like Google, Apple, Amazon, and Facebook.

In addition, Netflix also establishes strategic partnerships with movie producers, filmmakers, writers, and animators. The quality of content helps them get more users, indirectly contributing to the revenue. On the other end, Netflix also presents a lucrative platform for filmmakers and producers to enhance their visibility which might be difficult to do with movie theaters.

Netflix has been the demonstrator of how profitable and lucrative the segment of video on demand is. It has been such a cultural phenomenon that the word “FLIX“ has been used as a universal suffix for any video streaming service.

While it cannot be denied that technology played a major role in the transformation of Netflix from being an obscure DVD rental company to becoming the numero Uno provider of video on demand globally, equal credit has to be given to the quality of content and the strategic partnerships.

If you are an aspiring entrepreneur who would like to build your business from a video-on-demand app like Netflix, there are a few things that you will need to focus on. 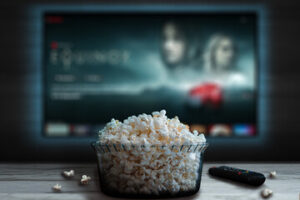 The business dimension of Netflix Clone

These steps hold true for any business. You will need to get your company registered, compliant with the local laws. It is to be remembered that the company is responsible for the content, and this would mean that your business is also liable to comply with the requirements in terms of film content and censorship regulations.

Technology is the skeleton of your business. You will need to have a robust and secure OTT app like Netflix. A video streaming app is a grand culmination of multiple factors like intuitive design, top-notch security, a proper backend, and data handling.

This has, perhaps, the most challenging part of setting up your video streaming business. It is to be remembered that Netflix was not just about the technology and the business model but also about the quality of content. Content is one of the reasons Netflix reigns supreme in spite of competition springing up left, right, and center, and that too, from big brands like Amazon. The closest competitors of Netflix like Amazon Prime, HBO, and Hulu stay at a considerable distance away from Netflix in terms of both user strength and content consumption.

You will need to partner with the right content producers and production banners. Alternatively, if your business has been successful, you can go ahead and produce your own originals, following the footsteps of Netflix.

All the efforts mentioned above will not find its deserving success if it is not marketed properly. As you may have known, Netflix has made sure it makes its presence in almost every possible platform. Netflix utilizes YouTube to tease people with trailers and snippets of their content. They also aggressively use social media and they even capitalize on trends to ensure that they do not miss out on reaching people, piggybacking on the works of others. Even on the off-line front, Netflix participates in launch events, making it even more popular.

The other areas of the Netflix clone

There are certain features and additions that can help distinguish your offering in the crowded space of OTT video. Netflix, for example, incorporates artificial intelligence to suggest content for viewers to watch based on the kind of content they consume. It also maintains a proper track of access to ensure that there are no security breaches.

Considering the fact that the access to the Internet is not confined to desktop or mobile anymore, your app should have an optimized presence for smart televisions, smart home communicators and screens, and even smartwatches where people can either select or play or pause content from your streaming platform.

As we have already seen, technology can be the least of your worries when it comes to launching an OTT platform like Netflix. The presence of white label clones of Netflix makes it easy for you to launch your app in the shortest possible time. White label solutions present a host of advantages.

You do not have to spend your time and money developing the product from scratch. Also, you can be assured that the basic product does not have any glitches in the code because it has already been tested enough and more. The customizability ensures that you can garnish your product with the brand elements of your choice.

All that is left for you to do is to get in touch with the company that specializes in Netflix clone app development. They will take care to understand the requirement and present you with a perfect solution that will help you ride the wave of this OTT revolution and gain your profit, especially during the times when people count on apps for entertainment.